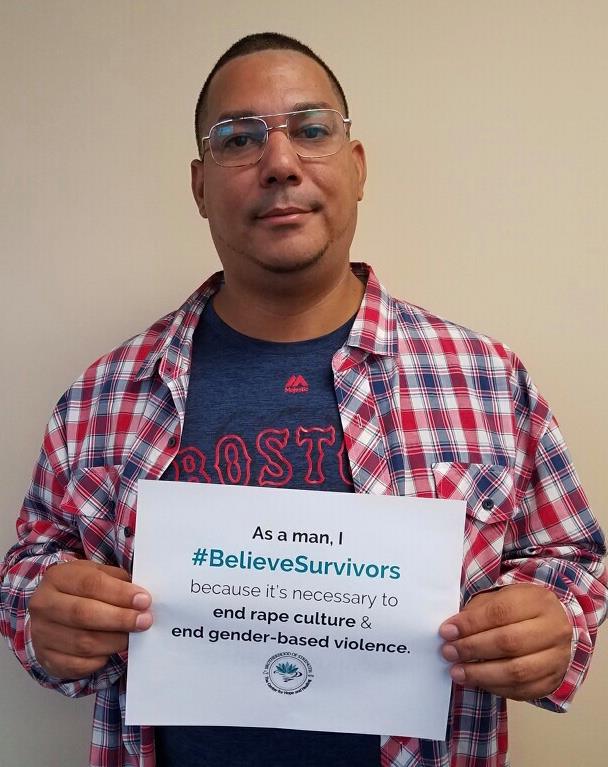 One of the reasons I decided to accept the Engaging Men and Boys as Allies in Sexual Violence Prevention Project Director position is playing out in our community right now.  This afternoon, Timothy Grover, founder of a local substance abuse program for young women, was at Lowell District Court for a dangerousness hearing, on several charges including assault with intent to rape. He was subsequently held without bail.

Before my work at The Center for Hope and Healing, Inc., my colleagues, supervisees, family members, and even partners had disclosed to me that they were survivors of sexual assault. Many of their stories had similar themes of men who took advantage of them who were well known in their communities. Growing up, I can remember having conversations where family members and I were told to stay away from and to be careful of men with a reputation for being sexually inappropriate. I was told to be careful and that’s all that was done!

We know that this inaction condones unacceptable behavior because we are told it is common in our communities and within our families. It reinforces the belief that a survivor of sexual assault was to blame because they were not careful and because they encouraged it.  On the other hand, men who displayed sexually inappropriate and violent behavior were excused. Survivors are left with shame, guilt, and embarrassment. We also know that not all men are violent. They can be villains, heroes, and anything in between. However, men alone have the ability to speak to other men with firsthand experience and that holds the power to end sexual violence.

The Center for Hope and Healing Inc. works to empower men and boys to live healthy and non violent lives. Through our Engaging Men and Boys (EMAB) Program we are working to train and equip community organizations and individuals as partners in teaching young men and boys about healthy masculinity. We also lead the Brotherhood Of Strength Men’s group (BOS). The men of BOS come from all walks of life and are committed to being leaders, role models, and change agents in our community. Members are encouraged to stand up and intervene when unacceptable behaviors, such as the series of events that took place at Lowell High School on August 26, happen in order to prevent other folks from experiencing sexual assault.

As men, we talk about the importance of understanding our impact in the workplace, with family, and in the community, and the role we play in ending gender-based violence. We understand that we need to be part of the solution considering that most perpetrators of all forms of sexual violence against women are male. We can no longer afford to build a community where we blame survivors for being sexually assaulted; Instead we must hold accountable those who commit harm.

What can we as men do?

1. Define your own manhood. Consider whether messages about manhood, like “don’t take no for an answer” , “be tough” or “don’t act gay” play a role in creating unhealthy and unsafe relationships. Choose what kind of man you want to be.

2. Talk it over. Better communication in sexual situations-listening to the other person, stating desires clearly, and asking when a situation is unclear-will make relationships safer and healthier. Create a space to speak honestly about sex.

3. Understand the ability to consent. Drugs and alcohol can affect people’s ability to decide whether they want to be sexual with someone. If a person is “really out of it” and can’t give consent, wait until you both are ready to enthusiastically say yes.

4. Get a woman’s perspective. Ask women how the fear of rape affects their daily lives and whether they know someone who has been raped. Listen and learn from them about the impact of rape and how to stop it.

5. Ask guys. Ask men how it would feel to be seen as a potential rapist and how they would feel if a woman or girl in their life was sexually assaulted. Learn about the ways sexual violence touches the lives of men.

6. Be aware of pop culture’s messages. We are surrounded daily by TV shows, music, magazines, video games, and movies that communicate messages about masculinity and relationships. Don’t let images in popular culture dictate your behavior.

7. Choose words carefully. When you use words to put LGBQ/T people, women, and others down, you support the belief that they are less than fully human. It is easier to ignore someone’s well-being when they are seen as inferior. Choose language that respects them.

8. Speak out. You probably will never see a rape in progress, but you will hear attitudes and see behaviors that degrade people and promote a culture of violence. When your friend tells a joke about rape, say you don’t find it funny. Use your voice.

9. Get involved. Join a group working to prevent violence. Or if there isn’t a group, start your own. Men’s anti-rape groups are becoming more and more common. Make a difference.   For example, to get involved with The Brotherhood of Strength, click here.

10. Show your strength. Don’t ever engage in sexual activity with anyone against their will. Make a pledge to be a man with strength.

Today, we ask you to join us in saying enough is enough. We call upon men in our community to not look away when you see inappropriate behavior happening and when you know about it.  We ask you to consider the positive impact you can have and the survivors you can help with your voice and your actions.

Miguel Andres Quiñones is the Engaging Men and Boys Project Director at The Center for Hope and Healing, Inc.  Contact [email protected]

We provide services to the following areas of the Greater Merrimack Valley:

In this interview I trace a line from plantations, residential “schools”, poorhouses & zoos+circuses to modern forms of incarceration/institutionalization.

Congratulations to @CHHLowell for having a home of your own for healing and inclusion.